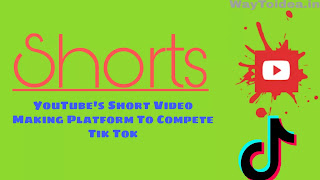 Hello friends, you all must know about YouTube, YouTube is the world’s number one video creating platform. If you are a Youtuber you Should know about Best Video Editing App All Time.

But Tik Tok has been growing very fast for the past few years, and has also launched its own advertising platforms. It has had a great effect on YouTube as well.

So YouTube has decided to open its own short video making platform to compete with Tik Tok, similar to Tik Tok, and YouTube has named its platform “Shorts”.

Maybe YouTube can launch a separate application for this “shorts” service. However, nothing can be said about it, because it is in the hands of Google.

YouTube has its own audio library, which is 4 times as much as Tik Tok, and 90% chance that if YouTube launches YouTube shorts then users will definitely get the option to use the audio clip which is in the audio library.

So it becomes an advantage with Google. So thus Tik Tok has fewer audio clips than Google. Let me tell you that users need audio clips the most, to make short videos.

Q.1 Who Will Win – YouTube Shorts or Tik Tok?

Q.2 What About Monitization On “Shorts” ?

Answer. Google has its own popular advertising platform, so maybe use Google AdWords. So Users Can make money.

Answer. After the launch of “Shorts”, Tik Tok will probably try to make some improvements by comparing the future of “Shorts” to itself.